As the LEMON project enters its final phase (project end planned in June 2023), the building of the LEMON instrument is also coming to the final straight. The overall LIDAR structure is assembled and the telescope is already installed and pre-aligned at ONERA premises, in Palaseau.

The emitter of the LIDAR system comprises several subsystems provided by several partners within the LEMON consortium. E.g., the pump laser from Innolas provides up to 250 mJ of pulse energy at a wavelength of 1064 nm. A small part of that energy is converted within one of the two NesCOPOs from ONERA and matched to the respective resonance wavelength of the target Greenhouse Gases in the 2 µm-region. A novel fiber-coupled frequency reference unit, provided by SpaceTech, is used to stabilize the wavelength and give an absolute reference. The resulting pulses with the designated spectral specifications are subsequently amplified in its energy with the larger rest of the same pump laser within a OPA setup by Fraunhofer ILT.

The emitter consists of two monolithic aluminum housings, one for the pump laser and the two NesCOPOs and one for the delay-line and the OPAs, that are mounted on a customized carbon breadboard. The construction is compliant with the challenging requirements of an airborne system regarding temperature changes and vibrational loads. The subsystems were built by the respective partners and assembled at Fraunhofer ILT, in Aachen. The integration and characterization of the subsystems were supported by the consortium partners during several visits and joined efforts in the lab.

The overall emitter yields tunable pulses within the 2 µm-region to address Methane, CO2, H2O and HDO with up to 16 mJ. The emitter was delivered to ONERA at the end of 2022 and is currently being integrated into the overall LIDAR instrument. After the full characterization in the labs, the ground-based validation in the atmosphere with in-situ instruments for comparison will take place at ONERA site in Palaiseau.

Details on the emitter and its design were presented at the SPIE Remote Sensing conference 2022 in Berlin, by consortium partner Michael Strotkamp (Fraunhofer ILT). The recording of his talk is available at this link: Conference Presentations (spiedigitallibrary.org).

Figures (from top to bottom, from left to right):

Figure 2: The Housing 2 comprising the delay-line and the OPAs.

Figure 4: picture of the two OPOs in Housing 1.

Figure 5: The emitter integrated on the overall Lidar platform at Onera. 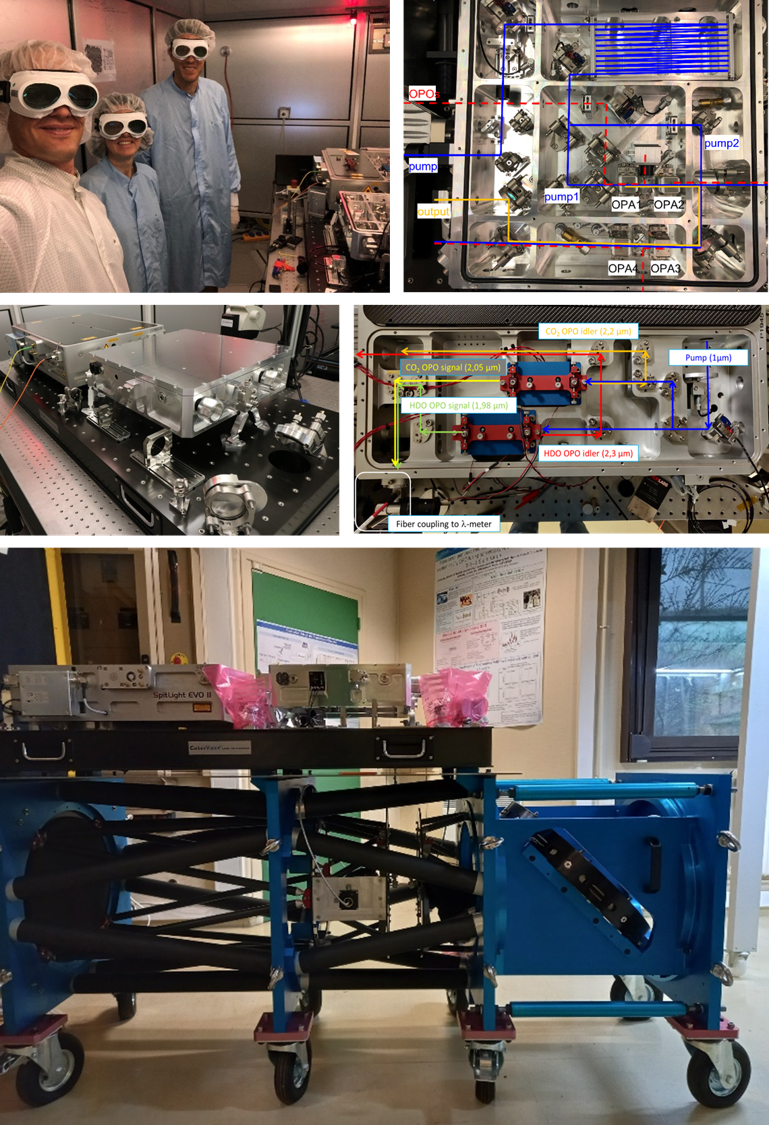 LEMON at the International Astronautical Congre...

The LEMON project at the EOS Annual Meeting (EO...

The LEMON project at the SPIE Remote Sensing 20...